​“When Ray died suddenly in 2007, the organization designated 20 acres of SEF land and raised monies to start White Eagle Memorial Preserve, a conservation burial ground. Ray's body was held in shelter during the permitting process, and he was the first burial in April 2008. Summer camp staff kept the camp programs and the Ranch going, and the burial ground was co-managed by a team of five founding stewards.

​“Sacred Earth Foundation became a 501c3 non-profit organization in 2009 and continues to offer summer camp and seasonal programming on the land. WEMP land is primarily oak and ponderosa pine forest, with a seasonal wetland meadow in the center of the 20-acre burial ground. WEMP practices low-density burial, and is platted on a grid system, where individual sites are 20'x20'. There are approximately 1200 sites available.

​“Burial places are dug primarily by hand, and people are buried in simple pine boxes or shrouds made of natural fabric. We are known for our grave art: using forest duff and plant material from the Ekone garden to beautify the grave, and to encourage the re-composition process. By Washington state law, pets are not allowed within cemeteries, but White Eagle can accept animal burials in designated areas surrounding the burial ground.” 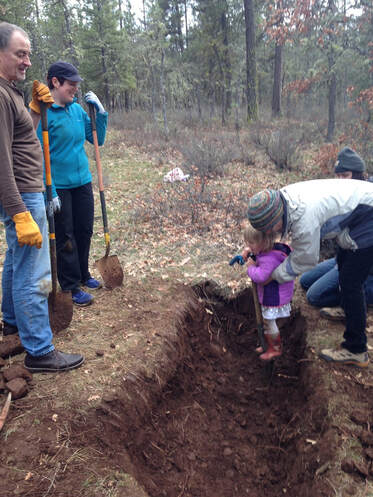 Opa, Addie’s grandfather, died in April 2018. He and his wife (Oma) lived in Goldendale, a town about 25 minutes away. White Eagle is a wilderness cemetery, and most families come to us from farther away on the day of a burial, and help participate in the closing of the grave as part of the service. Because Opa’s family was close by to be with him when he died, they were able to come out for 3 days in a row to help prepare his grave place, decorate the grave lining, and then to close the grave.

Addie had just turned three when her Opa died. She came out with her mom and her aunt and her Oma and we greeted them in the Ekone Ranch lodge, which hosts summer camps and other land-based programming, and during that particular week, there happened to be a baby goat hanging out in the lodge, as well as a giant stuffed pony. Addie was in heaven – lugging the pony over to meet the goat and chirping "Pony! Meet Goat!" repeatedly.
​
That first day, we went up to choose a place for Opa’s grave, and broke ground with our shovels, laying the topsoil aside to be added back as the top layer of his grave mound. Oma entertained Addie with sticks and pine cones while we worked for an hour or so. On their way out we stopped at the home of our shroud maker, and I told Addie that I would be right back but that they needed to stay outside because there was an old dog named Hazel inside, who needed her rest. I brought them a shroud and they took it back to town, to drop off at the funeral home.

They came back the second day, said more hellos to the baby goat, and then we headed up to continue digging the grave. Addie had decided that morning that she was Hazel, the old dog, and spent some time digging in the earth with her fingers and nose, like Hazel would have done. It was such a beautiful and silly and profound thing – to spend time working with this family of strong women who were preparing themselves to say goodbye, by helping to prepare this grave.

By the third day, Opa’s brother had arrived and lent his arms and his stories to our work. Addie wanted to help with the shoveling so her Oma helped her stand on the shovel to loosen the earth. Once we had made a hole deep enough for a shroud burial, Addie’s mom and her sister gathered pine needles, oak leaves, and pine cones to line the grave.

When the funeral home director arrived with Opa’s shrouded body, we transferred him onto the wheeled cart and walked him out to his place by the meadow. Then we lowered him into the grave and, using more forest biomass as the first layer of covering, we began to close his grave. I listened to the stories of this beloved man from the people who knew him best, laughing and crying as they shoveled, ringing his grave mound with small rocks and pinecones and lichen, and tucking him into the earth.

As we were saying goodbyes, Addie’s mom thanked us, saying, “This could have just been terribly hard, but instead it was also beautiful and funny and so meaningful.” Addie said goodbye to the goat and pony, and promised to come back soon. The next month, they joined us for a Conservation work party, hunting for weeds in one of the horse fields. Addie collected stones to feed the horses with, and made many new horse friends that day.

This could have just been terribly hard,
but instead it was also beautiful and funny and so meaningful.
​— Addie's mom